Sheriff warns public about camper near popular trail in Telluride

The San Miguel County Sheriff’s Office has issued a public warning about a man who is allegedly armed and illegally camping in the Mill Creek area of Telluride.

The individual has been arrested three times in the Norwood and Telluride areas since July 1 for charges of alleged weapons offenses, burglary of a local laundromat, possession of meth, trespassing and theft, according to a San Miguel County Sheriff’s Office Facebook post Aug. 23.

The sheriff reported that the man has been released on personal recognizance bonds by a judge over the objections of the 7th Judicial District Attorney’s Office.

According to the Sheriff’s Office, multiple weapons were allegedly found Aug. 23 around the man’s campsite. They included knives, hatchets, a crossbow and several swords just yards away from a popular hiking trail in the Mill Creek area. Multiple weapons were found at an alleged illegal campsite near a popular trail in the Mill Creek area of Telluride. (Courtesy of San Miguel County Sheriff’s Office)

It is suspected that the campsite has been illegally constructed on private property. The man’s identity has not been released to avoid pretrial publicity.

“In light of the double homicide of campers outside Moab, I want to caution people to be aware of their surroundings,” San Miguel County Sheriff Bill Masters said.

The two cases are not reported to be related.

On Aug. 18, two women were found shot to death at their campsite in the South Mesa area of the La Sal Mountains, according to a news release from the Grand County, Utah, Sheriff’s Office. They were found off the La Sal Loop Road.

The Sheriff’s Office, the FBI, Utah Special Bureau of Investigation and other law enforcement agencies are investigating. No suspects or arrests have been reported by law enforcement. 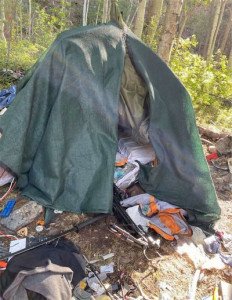 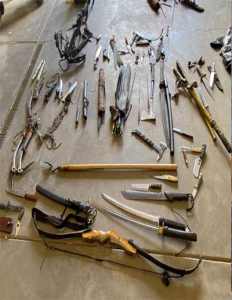 Mutliple weapons were found at an alleged illegal campsite near a popular trail in the Mill Creek area of Telluride. (Courtesy of San Miguel County Sheriff’s Office)

The two deceased women were identified as Crystal Michelle Turner, 38, and Kylen Carrol Schulte, 24, both of Moab.

Turner and Schulte were last seen about 9:30 p.m. Aug. 13 at Woody’s Tavern on Main Street in Moab.

According to CBS 2KUTV, the two women had told friends that a “creepy guy” was at their campsite and they planned to move to another location.

“Grand County is committed to working this case with tenacity and transparency. This is an active and fluid investigation,” a Grand County Sheriff’s Office Facebook post says.

A local business contractor who has remained anonymous has offered a $10,000 reward for information leading to the arrest and conviction of anyone involved in the South Mesa double homicide.

In the event useful information is provided by more than one person, the $10,000 reward will be divided evenly.

Anyone who saw Turner and Schulte from Aug. 13 to Aug. 18 or has information related to the case, is urged to call the Grand County Sheriff’s Office at (435) 259-8115. Callers also may leave a message for an investigator. Do not leave tips on social media.