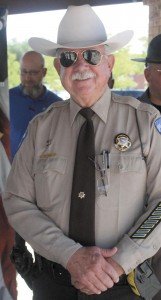 Ron Bruce first retired in 2002, coming to Lake City after a lengthy career with the Arizona Department of Public Safety — but he couldn’t stay out of law enforcement.

This time, though, he means it: Bruce, who was elected Hinsdale County sheriff in 2006, is wrapping up his third and final term in office this year. He is among five sheriffs in the six-county judicial district who are stepping down.

“Were it not for my age, I would have done another term. I’ve got a pretty well-oiled machine here, but for me, my age is a deal-breaker. But I’m proud of what I’ve done.”

It all started in 1974, when his neighbor, an Arizona state patrolman, told the then-surveyor he ought to do a ride-along. At last, Bruce relented.

“I rode a shift with him. It was like a narcotic. I was hooked. I said, ‘They pay you to do this?’” Bruce recounted.

After completing academy training, Bruce was assigned to a post in Casa Grande. Later — as he put it, divorced and broke — he took a transfer to a remote duty station in Houck, Arizona, about 12 miles from Mexico.

In the early 1990s, Bruce accepted another transfer, to a remote station in Graymount, where, for the next dozen years, he rounded out a high-octane career that also brought him his wife, Diane, a fellow Arizona state trooper.

“We were the only married couple assigned to the same squad, same days off. We had 200 miles of road to cover. We could not be successful following each other around. She was my closest backup and I was hers,” Bruce said.

Although his remote duty stations in Arizona were small, the risk was large.

In 1981, he and another trooper were on their way to dinner, when a frantic person flagged them down and led them to a home where they found a woman bleeding from multiple stab wounds. Bruce and the other trooper saved her life — despite a danger they only learned of a bit later. “Unbeknownst to us, he (perpetrator) was still in the house,” the sheriff said.

The suspect was found hiding in a closet. As for Bruce and his compatriot, they received a Lifesaving Award.

Bruce also nabbed a meritorious service award in 1986, for using his wits to save hijacked bus passengers.

He, Diane, other troopers and deputies intercepted the bus at a station by pretending an inspection was needed; therefore, the passengers needed to disembark. Most passengers came off the bus, as did one of the perpetrators when Bruce tricked the man. Bruce then ran onto the bus and drew down on the second suspect.

“He lost the gun and I took him into custody. I was scared to death,” Bruce said.

In Hinsdale County, he found a continued need and felt compelled to fill it, even though he was in love again with the civilian life. “I thought the citizens deserved more,” he said.

“I’m pretty proud of what we’ve accomplished here. People know when we show up, they’re going to get an honest and professional peace officer and I’m proud of that.”

In his time as sheriff, Bruce served on the Colorado Peace Officer Standards and Training board for six years, representing rural Colorado.

This year, too, he notched another honor when Lake City named him Citizen of the Year. “I’m proud of that, though I don’t know that I deserved it,” Bruce said.

Like his fellow sheriffs in the district, Bruce knows too well the challenge of running a small department that is responsible for serving a vast area. In the case of Hinsdale County, it is a summer tourist destination, too. “You’re spread pretty thin,” Bruce said.

“You cannot do this job and be effective if you’re afraid of conflict, because you know a significant number of people you interact with,” he added.

“That’s where the professional and the peace maker really come into play. I’ve had to arrest people I like.”

Once, while out with a rookie deputy, Bruce pulled over a friend of his wife. The deputy knew all about the friendship, and inquired, but Bruce told him it didn’t matter.

“That is the absolute key to success. … If you’re born here or got here yesterday; if you’re rich or poor, you’re going to get treated the same. We’ve striven to conduct ourselves in that manner,” he said.

“I enjoy a reputation of being honest and approachable. I treat everybody like they’re my neighbor. I like small towns. This is the biggest place we’ve ever lived — and that’s no joke. This is a thriving metropolis to us,” Bruce said, of tiny Lake City.

Bruce has seen a cultural shift in how law enforcement is viewed.

“If law enforcement gets out of hand, we need to be slapped. But at the same time, we’ve been slapped when we’re not out of hand. There’s an ever-increasing liberal philosophy in court that makes it harder to do our job. … Everything seems to be slanted more and more to the criminals,” he said.

This kind of landscape would likely prevent him from considering a third career in law enforcement, except for his plans to provide contract patrols next summer for the U.S. Forest Service, Bruce said.

He’s also seen a change in how some of those now joining law enforcement see their role.

When he started, 44 of the 52 in his academy class stayed with the same agency. “We ride for the brand and we’re ready to bleed for the brand. That (philosophy) isn’t there anymore,” Bruce said.

The philosophy does carry on in his family, however. These days, the Bruces’ children are the ones in public safety careers — daughter and son-in-law Brittany and Robert Brunnet are a dispatcher and captain with the Arizona Department of Public Safety, respectively.

Son Byron Bruce, although he is now an investment adviser, is a U.S. Army veteran. Daughter Tamara Slade is a former trauma nurse, while daughter Katie Slade is a paramedic, studying to be a nurse and physician assistant.

“They’re all, one way or another, have been, or are in the emergency services field,” Bruce said.

When Bruce leaves office, he’ll be taking things other than accolades and fond memories with him.

He still remembers a 1979 crash in Arizona, in which a 10-year-old boy was gravely injured. Bruce kept him alive for 20 minutes, through intense CPR.

“But I lost him.That 10-year-old boy, once in a while, comes back to me. You know you did everything you could do to keep him alive, but it was futile,” Bruce said.

He will never let go of one of Hinsdale County’s few murder cases.

Dr. Leslie Mueller, who was staying at a vacation cabin with her husband, drowned in Cottonwood Creek in 2008. Her husband was charged with her murder, but two different juries deadlocked and the case has not been refiled.

“That one will go to the grave with me,” Bruce said. “I still have Leslie’s picture on the credenza over my shoulder. When I leave, she will go home with me and I will look at her every day. That’s a small, small bit of what I owe her. I was not able to bring her … justice. That frustrates me.”

Bruce also remains frustrated by a 1984 cold case he inherited, the disappearance of Chris Harvey from the south end of Hinsdale County.

“We have no idea where that young man ended up. I’m convinced he’s dead, but I don’t know where the body is,” said Bruce, who is similarly frustrated by a 1986 cold case, in which a body was found in a tent by Little Emerald Lake.

Bruce is confident in the department he will leave behind, likely under the leadership of his undersheriff, Justin Casey, who is running unopposed for sheriff.

As for Bruce, he’s looking forward to a big retirement blowout next June (“Nobody wants to come here in January,” he noted); travel and other hobbies.

“I read voraciously. I love to get out in the woods. I like to hike, hunt fish and travel. Those are all on the horizon,” he said.

“I’m going to miss my staff. That’s the luxury of a small town. But I’m not going to miss being sheriff. It does take a toll on you.”

His career was on the whole a satisfying one, he also said.

“I always told my rookies you need to do what satisfies you in this job that you can go home and sleep well. … That’s what I’m proud of; I did save lives. I’ve been blessed by people reaching out to me years later and thanking me for what I did, including people I arrested,” Bruce said.

“I think the satisfaction has to be within you and not so much external, but knowing that at the end of the day, you did a good job.”

Katharhynn Heidelberg is an award-winning journalist and the senior writer for the Montrose Daily Press. Follow her on Twitter @kathMDP.