Between two stints, Dan Hotsenpiller has served the 7th Judicial District Attorney’s Office for roughly two decades. Wednesday, other prosecutors and members of law enforcement turned out to recognize him during a meeting of the Area Law Enforcement Agencies organization. 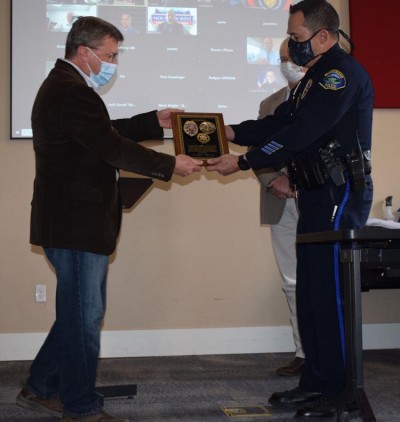 “It’s really an honor that I get to recognize Dan from our agency,” Montrose Police Chief Blaine Hall said, just prior to presenting Hotsenpiller with a commemorative plaque featuring the badges of his agency, the Montrose County Sheriff’s Office and the 7th Judicial District Drug Task Force. Hall, who has been police chief for about two years, first met Hotsenpiller when he was a newly minted detective.

“Dan quickly became that go-to district attorney, bar none. He had excellent advice, he had excellent case direction,” Hall said, later praising Hotsenpiller’s courtroom demeanor. “Wherever Dan was within the District Attorney’s Office, our cases were always better for it and as a result our victims were served. … There will definitely be a hole to fill.”

Hotsenpiller served in the DA’s office between 1994 and 2004. He was appointed as acting DA in 2011, after scandal rocked the office as the result of the former district attorney’s arrest for unlawful sexual contact and criminal extortion. Hotsenpiller subsequently stood twice for election, but because the office of district attorney is term-limited in Colorado, he departs in January. Seth Ryan, currently chief deputy district attorney, was elected Nov. 3 to be the new DA.

“All departments have experienced, in the past — we’ll call it difficult, sometimes embarrassing times,” Montrose County Undersheriff George Jackson said, in presenting the recognition alongside Hall.

“The part that amazes me is that we are at our lowest, someone always steps up to lead that department back to where it should be. Dan, you were that man.”

Perry said Hotsenpiller’s example helped him reform his agency when he took over after a special election in June that saw Ouray County voters recall the sheriff who had been elected in 2018 and seat Perry in his stead.

“You have helped us raise the bar. You are a model for that,” Perry told Hotsenpiller, speaking on behalf of himself and Ouray County Undersheriff Tammy Stroup.

Hotsenpiller said the support of law enforcement agencies was vital to the success of his office.

“I am very proud that this office is in a very different place than it was 10 years ago. I’m very proud that we have built a place that is ready to serve you and your departments in a way that we’ve never been able to do before,” he added.

Hotsenpiller also expressed confidence in Ryan’s ability to take over as district attorney.

“He came to our office at an extremely difficult time,” Ryan said. “We had a broken office, an office with morale problems, and office where people were leaving in droves. He came in. He reassured us that we were doing the right thing.”

One of the first things Hotsenpiller did was to install a glass door to his office, taking his pledge for transparency to a literal level, and rebuilt the trust in the office, Ryan added, further thanking the DA for being a mentor.

“I grew as an attorney by leaps and bounds doing trials with you. I learned about leadership,” he said. “Thank you, Dan.”