As protests grow over Floyd’s death in Minneapolis, Montrose chief and sheriff explain use of force training here

Law enforcement officers can use force against suspects only in certain circumstances, local agency heads said, in explaining their training methods and restrictions. 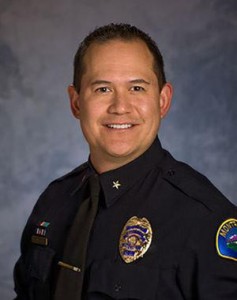 “All of this comes down to common sense,” Montrose Police Chief Blaine Hall said Tuesday, as nationally, protests over last week’s death of George Floyd in Minneapolis, continued.

Floyd, a black man, was detained as part of a counterfeit bill investigation, but did not survive the encounter. Minneapolis Police Officer Derek Chauvin knelt on Floyd’s neck for nearly nine minutes, according to the complaint charging Chauvin with third-degree murder.

“That’s ridiculous,” Hall said, of Chauvin’s alleged conduct. “…It was appropriate to charge the police officer with murder. He’s saying he can’t breathe and the officer continues to put his knee on his neck.”

Hall and Montrose Police Cmdr. Tim Cox said the laws governing use of force by police in Colorado come down to reasonableness and necessity — and chokeholds, which Hall said includes kneeling on a person’s neck when the person is facedown, are illegal.

“We do not teach chokeholds or any type of situation that requires officers to put a knee on someone’s neck. In fact, I would equate that to choking somebody,” Hall said.

When a person is handcuffed and facedown, even his or her own body weight can contribute to issues such as heart failure. The training dictates that a person placed upright as soon as practicable. 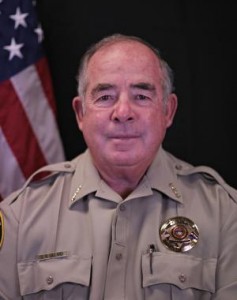 “We do not just hold somebody down,” Montrose County Sheriff Gene Lillard said. “If they’re combative, we will get them to the point where we restraint them.”

Safe restraint practices are used, including assuring proper handcuff fit, he said. Deputies are trained to position a suspect in a sitting or standing position as soon as possible to avoid asphyxia.

“In this organization, we would not put a knee on the neck or the throat area of a perpetrator or suspect. There’s other ways of detaining a person like that,” Lillard said.

“We train what we call response to resistance,” said MCSO Lt. Cam Boldan, who is in charge of the agency’s professional standards. “It can be anything from verbal (de-escalation) to actually applying arrest control techniques.”

The MCSO uses FBI defensive tactics, as well as Krav maga techniques, which are compliant with state law and POST.

“This agency complies with those requirements,” Boldan said.

The MCSO is currently finishing up the annual required training in proper hold and restraints, with about 95 percent of the force having completed the requirement and the rest on track to be done by June 7.

“It is specifically gauged toward proper hold and restraints,” the lieutenant said.

“This agency, we respect our citizens,” Boldan added. “Every call is a good call when you don’t have to take action and respond to resistance. We train in verbally trying to de-escalate. We train in crisis intervention, recognizing when people are in trouble … so that it doesn’t get to the point of you having to put your hands on them. We pride ourselves on talking, on de-escalation, as much as we possibly can.”

The MPD uses POST-approved and FBI defensive tactics. “That’s our primary style. It’s everything from handcuffing to escorting a resistive subject, to searching and restraining techniques,” Hall said. The method also trains in pressure points, weapon retention and weapon disarming.

“I think the training is adequate, but it’s not just about training. It’s about the culture you promote within an organization,” Hall said.

That starts with hiring and extends up the ranks to having a responsive administration that will take action, including terminating bad actors and rooting out other problems.

“We have no room in our profession for those types of things,” Hall said.

Lillard said in more than 40 years in law enforcement, he has not seen a local officer apply force out of anger, or to punish someone.

“I have seen officers kicked and bit and spat upon and punched and I have never witnessed a retaliation…I would not condone that amount of force on an individual,” he said.

“We’re not punishers,” Lillard said earlier. “That is forbidden in this organization.”

Officers do use force and lethal force — but are only protected if they do so within the bounds of the law. Additionally, two Colorado lawmakers, spurred by the deaths of Floyd and other minorities, are introducing legislation to increase accountability and transparency.

“Their (officers’) actions are only justified if they meet the statutory requirements, which we typically think of as affirmative defenses,” District Attorney Dan Hotsenpiller said, of existing law. Self-defense, or taking action to save the life of another from a criminal threat, are types of affirmative defenses.

Colorado statute says peace officers who use excessive force are subject to criminal laws, just like anyone else. “That is a basic concept and it is in black and white,” said Hotsenpiller.

When an officer uses deadly force, the matter is investigated by the 7th Judicial District Critical Incident Team. Hotsenpiller reviews the team’s findings in light of applicable statute to determine whether a law has been broken. In his time in office, Hotsenpiller has not found an instance in which the involved officers’ use of force was not justified.

Colorado statute also spells out specific instances in which officers are authorized to use force: when effecting an arrest; when preventing an escape from custody and in self-defense or the defense of others, which must be “reasonable and necessary.”

“That means an objective standard, not just to that officer. It’s reasonable to others. Necessary means and implies that they must use the minimum force required. Any more is not necessary,” Hotsenpiller said.

The rules for using deadly force are more stringent than they are for simple use of force, he also said. This must be reasonable, necessary, and only to effect the arrest of someone who has committed a felony with a deadly weapon. Deadly force is also statutorily permissible when officers act to protect themselves or others from the use of deadly force by another.

“We’re subject to the same laws everyone else is subject to. If we improperly use force, we can be charged criminally,” Hall said.

The officer and the agency involved are also subject to civil liability, although state and federal immunity concepts can come into play (see ‘Can officers and law enforcement agencies be sued?’).

Officers who witness improper force or other improper conduct, but do nothing, or who fail to report it, can also be charged.

Boldan said that every time deputies use force, the matter is reviewed up the chain of command, to ensure it was proper to do so.

The MCSO and MPD launch internal investigations when one of their officers is accused of excessive force (as well as in other circumstances). Internal affairs officers like Boldan serve merely as fact finders in the process. The investigation is used to determine whether agency policy was violated and is not a criminal proceeding.

If an IA complaint is citizen-generated, then under a recent law, the investigation’s findings are releasable. Agencies can start with a summary, but if that is inadequate, the file can be released. Previously, the person who made the complaint was only informed of the finding and could have it explained, Hall said.

“Peace officers in our world are here to protect our society and property and do good for the citizens,” Lillard said. “We are not the enemy.”

Can officers and law enforcement agencies be sued?

The simple answer to the question posed in the headline is “yes” — but there are federal and state standards pertaining to governmental immunity, which plaintiffs must clear in order for such suits to proceed.

Law enforcement officers are public employees. Federal law (Section 1983 of the Civil Rights Act) allows for qualified immunity in civil matters. To be deemed ineligible for qualified immunity, the officer who is sued must be acting under the color of law and must be found to have deprived a person of constitutional rights, District Attorney Dan Hotsenpiller said.

Police officers and deputies who are engaged in their official duties are of course acting under the color of law, he said. The more difficult component can be proving that they, by their conduct, deprived someone of clearly established constitutional rights. And such deprivation has to be very clear, Hotsenpiller said. In one case arising out of Colorado, the plaintiff was required to prove that no police officer could have misunderstood the fact that the involved officer’s actions were violating federal law, he said.

“It has to be really clear. It can’t be a gray area we’re going to have a hearing about. If we’re having a hearing, it’s not clearly established. That’s the line,” the DA said.

Officers may be shielded from civil liability in state court under the Colorado Governmental Immunity Act, as well. This act holds that a public employee, such as a peace officer, is immune from all claims that lie in tort (civil liability) unless the act or omission by the officer causing the injury was willful and wanton, Hotsenpiller explained.

“What they’re saying is, if you just make a mistake, maybe you were not as careful as you should have been, you’re going to be immune. But if you act in a willful and wanton manner — which means you really disregarded someone’s rights and disregarded their safety — then you can be sued,” he said.

“Qualified immunity is from the lawsuit itself and the liability. One of the purposes is to shield public employees from the burdens associated with trial,” Hotsenpiller added.

He also said officers carry the risk of federal criminal charges in certain instances of excessive force — and the penalties can be severe as life in prison, depending on the charges and circumstances.

“There’s a reason for qualified immunity. We expect officers to constantly be making decisions in circumstances that are changing rapidly and developing quickly. We need them to be able to act. We can’t have a system where they are constantly being subjected to civil lawsuits,” Hotsenpiller said.

“But the law recognizes there are times that they can be held civilly liable.”