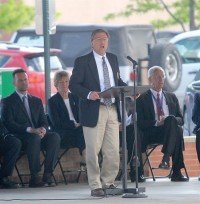 Dan Hotsenpiller, the departing district attorney for the 7th Judicial District, can look back on a host of changes as he prepares for his career switch to a law enforcement academy assistant director.

Hotsenpiller is leaving office in January due to term limits and, for the first time since 1994, won’t be directly engaged in criminal law.

“I’m very excited about that,” said Hotsenpiller of his upcoming role as part-time assistant director of Technical College of the Rockies, where he will also be an instructor.

“I believe that any elected DA should spend time and resources supporting law enforcement education. Now I get to do it in a more meaningful, focused way.”

Hotsenpiller first served with the prosecutor’s office in 1994 as a deputy district attorney when, working out of Telluride, he also handled cases on the western end of Montrose County. He transitioned to the Delta office in 1996 — where he was joined by a part-time prosecutor and one administrative staffer. There are now four deputy district attorneys in that office, a testament to how busy caseloads have become, although even then, Delta was not free of serious crime.

“I did District Court, which meant everything,” Hotsenpiller recounted — adult and   juvenile felonies and misdemeanors, all sex offenses, all types of cases. The little court was busy, one year seeing more than 400 felony filings.

“I remember hitting that number. Delta has historically had its share of violent crime and that was true back then as well as now,” Hotsenpiller said.

Those cases included the homicide of Delta teen Cindy Booth, which was successfully prosecuted even though her body was not recovered.

In 2000, Hotsenpiller came to the Montrose office as the felony prosecutor in District  Court; he departed in 2004 for private practice at Delman and Hotsenpiller, where he mostly handled criminal defenses. Although in the end, he found he preferred prosecuting, Hotsenpiller said the experience invaluable.

“You develop a very strong personal relationship with some of your clients. You’re trying to help them. I learned a lot. I’m by far a better prosecutor after having been a defense attorney,” he said.

A shocking turn of events in 2010 brought him back to the DA’s office. That year, the sitting district attorney was charged with criminal extortion and unlawful sexual contact against three employees in the office. The Colorado Attorney General’s Office took over because the then-DA couldn’t perform his duties during the pendency of his case, which ultimately ended in an Alford plea and a four-year term of probation, as well as disbarment.

“It was kind of weird, to say the least,” Hotsenpiller recounted. But although Patrick signed an order, it did not go into effect, because the sitting DA then resigned. The date of his resignation was effective on the date John Hickenlooper took office as governor, which meant the outgoing governor did not have the legal authority to appoint anyone, because   the vacancy would not occur under his term.

Hickenlooper ultimately appointed Hotsenpiller to the office on Jan. 25, 2011. Hotsenpiller then ran for election in the next regularly scheduled DA’s race.

He said he did not have a good sense of what he was walking into, in terms of office morale and battered trust. In his ignorance, he once asked a staffer to come into his office, only to have that person refuse. Another employee explained the person couldn’t bear to go into  that office because that is where she had been sexually victimized.

“I didn’t know that; I didn’t know what had happened. That was one of the moments that I really realized what I didn’t know,” said Hotsenpiller. “Literally, that office was a crime scene.”

He assembled the staff and let everyone just talk. “What I tried to tell them was that they    all had jobs and that they didn’t have to worry. We were going to figure out how to go forward together. The environment in the office had created a lot of insecurity. There was a lot of bully kind of management that had created stress for people. I wanted to try to    change that.”

He thinks the office has changed for the better.

He said it had been important to enhance services to crime victims, which has been done under the leadership of advocate Aimee English and those who work in victim services. Although there is always room for improvement, and not all victims are happy, Hotsenpiller was able to bring in more staff to do more for victims. “That was a priority and I’m proud of that,” he said, going on to also tout transitioning from paper records to electronic, under the leadership of Sherry McKenzie.

“We’ve really enhanced our communication with law enforcement. Again, we’re not as good as we want to be, but we’re much better than we were,” Hotsenpiller said.

Although it took time, the capacity for prosecuting major cases has also built. During his tenure, the DA’s Office has prosecuted a Gunnison woman (since deceased) and her daughter for the shooting death of their son/brother; the stabbing murder of a Delta County woman; four of five defendants in the deaths of two children at a Norwood religious enclave and the prosecution of a wealthy Texas man in his wife’s death, which twice ended in a mistrial and has not been refiled.

Hotsenpiller also served as special prosecutor in the Durango murder of Nicole Redhorse, which had to be tried twice after an appeal.

“You look back and the capacity of this office to prosecute major cases is established,” Hotsenpiller said.

Getting Seth Ryan, who is soon to be sworn in as the new district attorney, to take on sex crimes prosecutions was also a good move, Hotsenpiller said, although again, not everyone has been happy.

“A lot of people in the community were very frustrated that I didn’t have a magic wand to   get those cases prosecuted right away when I got appointed. I don’t have a magic wand,” he said. “It was a lot of work and key to that was when Seth agreed to take the time.”

Other changes affected the DA’s Office have included relocating the Montrose division to a separate, new annex and also a new courthouse in Gunnison, plus redesigns in other counties, most recently, ongoing upgrades in Delta.

“Without question” working with his staff and making positive differences for them was the most meaningful part of the job, he said.

The hard part? By design, the system does not always work quickly — if the system moves too fast, it could come at the expense of justice.

“I think we’ve got to rebalance that. I think there needs to be some very serious discussion about the state of the criminal justice system. The fact is, we spend a lot of money and a lot of time and I don’t think we’re being very effective.”

Hotsenpiller said the way domestic violence cases are handled have not changed much in  his 27 years as a prosecutor. Although substance abuse is a public health problem, it is still  a criminal justice problem and both systems need to do more to address it, he also said.

He leaves office looking forward to his opportunity at the technical college, as well as plans to work with the state attorney general to revamp and redesign police academy curricula over the next five years.

“This is exciting. I really believe we can do a better job of police officer training and support,” Hotsenpiller said.