No basis for charges in Medina death

DA: No basis for charges in death of man who fell off cliff while fleeing Ouray officer | 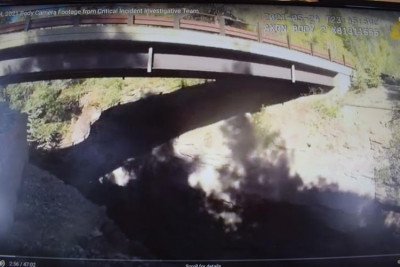 A still photo from Ouray Police Officer Brady Suppeland’s body camera footage shows the bridge and canyon where Luther Medina fell to his death May 24, while fleeing police. (Screenshot)

A Montrose man who died fleeing Ouray police in May apparently slipped and fell into Dexter Creek Canyon after ducking around the bridge railing in his flip-flops and scooting toward the edge as the pursuing officer yelled for him to stop.

There is no basis for charging Suppeland, District Attorney Seth Ryan announced Friday. In his review of the 7th Judicial District Critical Incident Team’s investigation and Suppeland’s body camera footage from May 24, Ryan found “it is clear that Luther Medina, of his own volition and in an attempt to escape from Officer Suppeland, went under the bridge spanning Dexter Creek.”

The recording shows Suppleand did not follow Medina under the bridge, but in fact warned him as Medina scooted on his buttocks to the edge of the canyon and fell.

According to Ryan’s review and findings, Medina landed face-up in the creek below, with his face partially submerged in the water.

Although Medina was still breathing when Ouray Mountain Rescue personnel reached him, his breath stopped about two minutes later and efforts to resuscitate him were not successful.

Medina died of blunt force trauma that caused multiple fractures and internal bleeding, a pathologist determined. Aspirating on the water and alcohol intoxication were “significant contributors” to Medina’s death, the manner of which was declared accidental.

“He took off on foot and went around the railing,” Suppeland is recorded as saying in response to another officer’s query as to whether Medina jumped off the bridge.

“I was chasing him and then he tried going under the bridge and then just slipped and went over. … He was crawling around under here (Suppeland points); you can see his shoes, or sandals there, or one of them. Basically, once he went over, I lost sight of him,” Suppeland says.

The officer made it to about the point where he found Medina’s remaining shoe and tried to see where the man fell.

“I knew it’s just straight down,” Suppeland says on the recording.

“Brady did yell at him ‘stop, stop, stop,’ because he (Suppeland) knows the area and knows the cliff, but he (Medina) wouldn’t stop,” an officer with Suppeland later tells others who arrive on scene.

“He was actually yelling back at me ‘no,’” Suppeland says.

“There is no evidence in the body camera recording or otherwise that Officer Suppeland exerted any sort of force against Mr. Medina or performed a conscious act as a result of effort or determination that caused the death of Mr. Medina,” Ryan stated in his report.

The three seconds between Medina appearing on the footage while beneath the bridge and him falling “is strong supporting evidence that Mr. Medina’s death was not caused by an act performed by Officer Suppeland,” Ryan also said.

Per the report: The incident began shortly after Medina was told to leave the Ouray Hot Springs Pool, where he had spent the afternoon of May 24 with his girlfriend.

The woman later told investigators Medina, who had been trying to stop drinking, became incoherent and was lapsing into unconsciousness, so she encouraged him to sit in the cold pool to wake up. As Medina was getting into the pool, he accidentally hit her with his elbow and lifeguards asked them to leave. Medina panicked, she said, and left in his car. She stayed behind at an employee’s urging because she felt he was too drunk to give her a safe ride.

Pool staff reported the couple had been arguing and that Medina was so intoxicated that he was crawling around on the pool deck and yelling vulgar words, Ryan’s report says.

Medina had so much difficulty walking that he at one point fell into the pool. When told to stop raising a ruckus, Medina cursed at employees, who then asked him and the woman to leave and started escorting him toward the locker room.

Medina continued falling down and yelling, so staffers called 911 for help. Once in the locker room, Medina urinated on the floor, but he left when told the police were coming.

An employee took down his plate number and called him in for possible drunken driving.

On the body camera footage, Suppeland tells others on scene that he had responded to that call, but there was too much cross traffic the first time he attempted to stop Medina, and he then decided to follow the car until there was a wide enough spot in the road.

At the bottom of Ouray County Road 14, someone was performing roadwork, however, so it was not safe to stop Medina there.

Medina then went up Road 14 and although it seemed at first that he was trying to find a spot to pull over, he kept going.

At the intersection of Road 14 and 14A, Medina got out of his vehicle. Suppeland can be heard ordering him to stop and identifying himself as the police. He draws his Taser and shouts “hey don’t go down there.”

Ryan’s report states Suppeland initially drew his gun when Medina got out of the car, but that when Medina ran, the officer holstered the firearm and began getting his Taser.

Within seconds, the camera records Suppeland asking for paramedics because Medina has fallen into the canyon. The officer also requests Ouray Mountain Rescue, because the terrain is too steep and treacherous for him and the officer with him to navigate.

As other responders arrive at the scene and also try to determine if there is a safe way down, Suppeland gets a digital camera to begin taking pictures, stating “I have a feeling this investigation is going to go a certain way.”

Throughout the footage, Suppeland can be heard expressing concern.

“I just wish he would have stopped like I asked him to,” he states, explaining how Medina ran around the edge of the railing and began scooting under the bridge.

“I couldn’t see it because, you know, it’s a cliff. I probably should have threw a Taser or something to try to stop him. I just didn’t think somebody would …” The officer then explains the chase leading up to the intersection and clarifies that he drew his weapon when Medina exited his car. Medina then took off.

“So I holstered and then I was trying to get my Taser out and he started crawling under there,” Suppeland says.

Later in the footage, Suppeland elaborates that Medina was staggering as he ran away.

“I didn’t anticipate somebody running themselves off a cliff,” the officer says.

Another peace officer on scene tells Suppeland: “You can never, ever know what’s in somebody else’s brain. Don’t feel responsible for this. You were doing your job.”

Prosecutors cannot file charges against someone without probable cause that a crime was committed, Ryan said. In order for criminal liability to attach, a person must commit a “voluntary act” as well as being in the state of mind required under statute. A voluntary act means one performed consciously as the result of effort or determination.

“Based on the evidence collected, reviewed and analyzed, there is no probable cause to believe that Officer Suppeland committed a crime and accordingly, the District Attorney’s Office is prohibited from filing charges against him,” Ryan’s report concludes.

The pursuit and Medina’s death were first reported by the Ouray County Plaindealer, which called for the release of the body camera footage and also made formal requests for it.

Ryan said on Friday he had completed his report, then talked to the Medina family, who viewed the footage.

“We do want to offer condolences to the family,” Ryan said. “The District Attorney’s Office expresses its deep condolences for the loss of their brother, their son and family member.”

The full report and the 47-minute body camera recording can be viewed here.