New law and COVID seen as driving down felony filings

New law and COVID seen as driving down felony filings 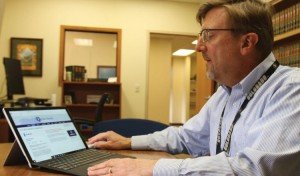 7th Judicial District Attorney Dan Hotsenpiller browses his computer in this file photo. He says felony filings are down due to COVID-19 and a new reclassification of drug possession offenses. (Justin Tubbs/ Montrose Daily Press)

The number of adult felony cases filed in 2020 dropped judicial district-wide, owing in part to the reclassification of drug possession to a misdemeanor offense, as well as, possibly, the ongoing effects of the pandemic.

In 2019, prosecutors brought 1,141 felony cases between Jan. 1 and Dec. 14; in the same period this year, felony filings stood at 903 for the 7th Judicial District — Montrose, Delta, San Miguel, Ouray, Hinsdale and Ouray counties.

“What they show is, overall, in the entire district, we’re down 26%,” District Attorney Dan Hotsenpiller said.

Montrose, as the most populous county in the district, had the most cases, but still saw fewer filed this year than last — 408, compared to 553 in 2019, or about a 35% reduction.

Hotsenpiller said it is difficult to determine why, and that it would be a mistake to think crimes are not still being committed. He pointed to two developments that kicked in at about the same time.

On March 1, legislation that reduced possessing 4 grams or less of Schedule I or II drugs from a felony to a misdemeanor offense went into effect. Now in Colorado, people can only be charged at the felony level for that type of offense if it is for the fourth or subsequent offense.

The new law also precluded charging with drug possession someone who was found with residual or unusable amounts of drugs on needles or in syringes.

Although the new law was passed in 2019, it did not affect filings that year, so there were more drug felonies charged in the district.

“What else happened in March of 2020? March 16 is the pandemic shutdown,” Hotsenpiller said, referring to the first round of safety precautions that went into effect because of the novel coronavirus.

The Friday before the shutdown, Hotsenpiller had just sent a second-degree murder case to a Delta jury and, knowing restrictions were in the works, he and the presiding judge waited with trepidation, wondering what would happen if the jury was still out when a shutdown was announced. The jury returned a verdict that day, however.

But elsewhere in the district, COVID was already affecting cases. Gunnison County was initially shut completely down to outsiders. Hotsenpiller was told anyone of his team who had been in Gunnison in the seven days prior to March 15 would have to quarantine, and also that none of them could come into the county.

Hotsenpiller said he had expected felony filings to go down this year, just by considering the studies done in larger jurisdictions like Denver County, which had anticipated a 20% drop in felony number, just because of the reclassification of drug possession offenses as misdemeanors. The change seems to have had more of an effect on filings than COVID-19, although the latter has snarled court proceedings in myriad ways.

“So when I look overall and see a 20% decrease, I guess I’m not surprised. It’s consistent with what we’re seeing, which is a really not much of a reduction at all due to COVID,” Hotsenpiller said.

Whatever the reason, and whatever the offense level, the drug problem has not gone away, he said.

“Similarly, the COVID and the pandemic has impacted police activity and it’s slowed down the criminal justice process, including the filing of cases.”

In order to reduce the potential for coronavirus spreading through jails, which are closed populations with high risk of spread, law enforcement agencies have been making fewer arrests, instead issuing summonses into court for lower-level offenses where public safety is not at significant risk.

This does not mean there is less crime, Hotsenpiller stressed. “It just means there’s fewer case filings. I don’t think the pandemic has meant there’s less crime. It’s the systemic response that’s changed, not the incidence of crime,” he said.

“If anything, we continue to see an increase in violent crime. That’s our experience. Incidences of violent crime, particularly domestic violence, we’re seeing a significant number.”

What it all means for his office is hard to pin down, he said, pointing to on-again, off-again directives.

Initially, jury trials were suspended in the 7th Judicial District because of the pandemic restrictions on larger gatherings and the inability of any court building in the district to allow for proper social distancing for jury selections that would have brought hundreds of people together at one time.

As restrictions eased, trials resumed, only to be put on hold again as another wave of the virus rippled through the state.

“We started doing jury trials in July after they had been suspended from the middle of March. We had done 10 jury trials throughout the district through the beginning of October, when they were suspended again,” the DA said.

At last report, trials were on hold until at least February. When they resume, the courts will be dealing with a terrific backlog.

“We understand why that’s probably the case, but we have hundreds of jury trials in the pipeline that are scheduled. Managing that going forward is going to be a real challenge,” Hotsenpiller said.

His office is actively reviewing open cases and conducting what business it can via remote technology; prosecutors and defense attorneys have been able to resolve some cases, even during the pandemic. And, there has been some unlooked for benefit to the changes the virus made necessary.

Hotsenpiller said appearing by Zoom or similar video/internet technology may be here to stay, even once America turns the corner on the pandemic. This not only benefits prosecutors who in the past have ping-ponged between courts in different counties, but also defendants. Hotsenpiller said the remote access to courts that was implemented has led to a drop in failures to appear.