September 21, 2016 — Two years ago, Denetta Dunlap was just returning to her hometown of Montrose for a new role — a victim advocate for the 7th Judicial District. She proved adept: Just last week, the Colorado District Attorneys Council named Dunlap named Victim Advocate of the Year. 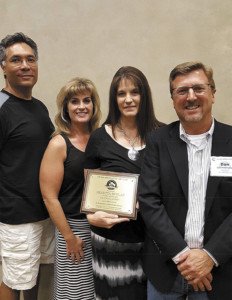 “It’s a great honor,” Dunlap said Tuesday. “It’s amazing, only being here two years, to be honored for something like that.”

Advocates assist people identified as victims under the Victim Rights Act with a range of services, support and outreach. This includes communicating with victims or family members about the case and ensuring prosecutors know their needs and wishes.

“Denetta specifically advocates for victims of sex crimes, both adults and children, from diverse socio-economic backgrounds,” said Deputy District Attorney Seth Ryan, the sex crimes prosecutor for the 7th Judicial District. “They (cases) can be very emotionally charged, more so than any other type of case. It takes a unique type of personality.”

Dunlap is both compassionate and firm when necessary, Ryan said.

“She just strikes a great balance,” he said.

She applied for a legal secretary position here two years ago, in hopes of returning home. Hotsenpiller asked her how she would feel about becoming a victim advocate.

“I jumped at it,” Dunlap said. “I thought it would be an interesting job to do. And it is.”

Dunlap shepherds sexual assault victims through the court process, and often takes it upon herself to keep in contact with them, even after a case concluded.

Understanding the court process poses a challenge for victims and Dunlap helps them in that regard.

Dunlap is one of six victim advocates working for the DA in the 7th Judicial District, which encompasses Montrose, Delta, Hinsdale, Gunnison, San Miguel and Ouray counties.

Ryan said Dunlap is vital, because without her, his job “would be extremely difficult.  These are some of the most difficult cases to prosecute. It allows us to focus on our cases and (ensure) that someone has time to make sure the cases are (handled).”

Although her job can be challenging, Dunlap said she is glad to be able to relay the victims’ feelings to Ryan, along with the understanding that they have been hurt.

“Being a voice for victims is very satisfying,” she said.

Dunlap encouraged others to consider the field of victim advocacy.  “I think there needs to be a lot more advocacy everywhere,” she said.