The District Attorney’s Office would like to recognize Sergeant Travis Lackey of the Delta County Sheriff’s Office as the recipient of the Red Cross Hero of the Year Award and thank all our partner agencies for the work they do on a daily basis. 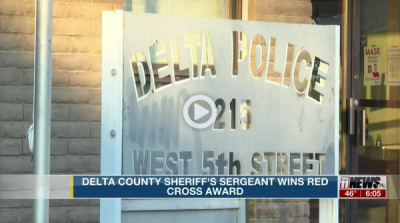 View original article and watch video coverage of this story

Delta, Colorado (KKCO) — Sgt. Travis Lackey of the Delta County Sheriff’s Office won the Hero of the Year Award during the Rocky Mountain Heroes award ceremony on March 20. The Red Cross recognized his actions when responding to a call this past July during which he confronted a suicidal man armed with a pistol.

Sgt. Lackey described how both he and his partner, Deputy Jake Hernandez, approached a dangerous situation. They were unable to approach unseen because the man, with his distraught wife clinging to his side, was in the middle of a field in Eckert. Unaware of the man’s intentions, they could be at risk of getting shot. However, they both decided that they had to take action.

“When I got about fifteen feet away from him, I saw the gun start to rise. And I didn’t know if he was… gonna try to shoot his wife, shoot us, shoot himself. But as the gun went up, I was close enough. I was able to jump on him, twist the gun out of his hand, and hold him down while Deputy Hernandez got hold of the other hand and secured him.”

According to the sergeant, he was proud to represent his department when he accepted the award and is honored by being charged with making his community a better place. He encouraged anyone facing a similar situation to call the authorities for help, and urged those struggling to seek help from loved ones.