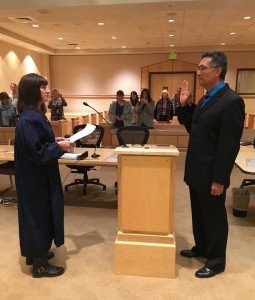 The time has come.

With complex cases stacking up, the District Attorney Dan Hotsenpiller has reestablished a chief deputy district attorney slot in the 7th Judicial District. The man for the job, Seth Ryan, was sworn in Monday.

“I’m really honored that Dan has the confidence in promoting me to chief deputy district attorney,” Ryan said.

“As part of the job, I’ll be managing and supervising people who are doing more sexual offense trials. I look forward to passing on what I’ve learned over the last five years and moving forward with a robust special victims unit.”

Each prosecutor’s office in Colorado has such a unit and each is part of a larger group within the Colorado District Attorneys Council. “We help each other. We pass ideas off each other,” Ryan said.

Although he is not required to have a chief deputy district attorney, Hotsenpiller thought it was appropriate to promote Ryan to that role.

“He earned it,” Hotsenpiller said.

The position is below that of assistant district attorney, and serves a different purpose.

“It’s a leadership position within the DA’s Office. It’s a way of acknowledging they’re playing a leadership role in the office,” the DA said.

Ryan is the first chief deputy district attorney he’s had since he came aboard in 2011, Hotsenpiller said. He sees Ryan playing a key mentoring role.

“We need to get him at a point where he is supervising, which involves training, coaching and mentoring our other attorney staff to do these sex cases. They’re the toughest of the tough, difficult cases and we need to start building our capacity,” said Hotsenpiller.

“When we have attorneys who have experience doing those cases, they can do any major case we’ve got pending in our office.”

Ryan concurred with his boss when speaking of the complexity of sex crimes.

“It’s the hardest and most rewarding thing I’ve ever done in my law career,” he said.

In his new role, Ryan will be supervising more in Montrose, Ouray and Delta counties and taking a team approach to such trials.

“Having two people with two sets of eyes and splitting up the duties is always a plus when litigating complex cases. There’s going to be a lot more team effort. Sex crimes, they’re pretty intense as far as pleadings and motions,” Ryan said.

After law school, Ryan first worked in Jefferson County as a special assistant county attorney. He has been with the 7th Judicial District Attorney’s Office for 11 years.

“Few prosecutors can do exclusively sex offense work and maintain their enthusiasm and professionalism. Mr. Ryan is one of those rare prosecutors,” Hotsenpiller said.

The DA referred to just one of the major cases in the 7th Judicial District, in which five people are charged with offenses related to the deaths of two young girls in Norwood last year. Ryan has been leading the three-attorney team prosecuting the case.

“Seth has stepped up and is doing great work in some of the most complex cases anywhere will ever see,” Hotsenpiller said.

“Clearly, Seth has demonstrated the leadership skills and abilities that fully justify his new position as chief deputy district attorney for the 7th Judicial District.”

Ryan said his new role will free him up to handle even more of the complex cases.

Katharhynn Heidelberg is an award-winning journalist and the senior writer for the Montrose Daily Press. Follow her on Twitter @kathMDP.