November 14, 2016 — If the chain of command for the Seventh Judicial District District Attorney’s Office seems confusing to a layperson, that’s probably because it can seem complex even to those who work within the system; though governed by the state, funding is expected to come from local sources.

“My job is to prosecute criminal violations of state law in state courts, in front of state judges,” Seventh Judicial District DA Dan Hotsenpiller said. “The system is defined and driven by the state.”

“But the laws require the county to fund it, and the County also builds the Courthouse.” 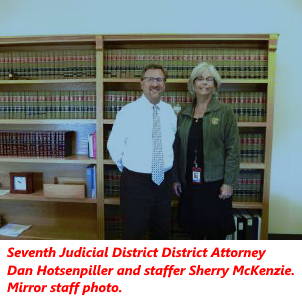 Still, “We are not a county department,” said Hotsenpiller, who as an elected official oversees the day to day operations of the office. “We serve six counties—Montrose is no more important than the rest.”

Hotsenpiller said he is grateful for the support of officials in the counties that the Seventh Judicial District serves (Montrose, Delta, Ouray, San Miguel, Hinsdale and Gunnison). “There is no mechanism in state statute for how to reach budget agreement,” he said, “or on how to resolve disputes. I am lucky to have such great support from the counties; we meet annually to talk about issues.”

Though the Seventh Judicial District covers a broad geographical territory, “We do not have the economies of scale here,” Hotsenpiller said, adding that it costs more to provide part-time services in a rural region than in more populated areas. “We do not have the volume that would allow us to achieve economies of scale; we have seen numerous programs here get started that just can’t be sustained.”

Potentially useful programs such as pre-trial services could be mandated by the state, without funding attached, he noted.

“I actually support pre-trial services; (offenders) get out of jail but are monitored and tested. They have to check in, sometimes more than once a day, and they are plugged into services.”

Programs are monitored, “And it connects our decisions to the actions of the offender — if they can be out in the community, they are fine. But the legislature doesn’t fund it because they don’t have to,” Hotsenpiller said. “There is an imbalance between urban and rural areas in our state and counties with respect to criminal justice funding.”

While many locals question why accused criminals seem to be right back out on the streets after being charged with a crime, Hotsenpiller points out that the District Attorney’s Office does not set bond in criminal cases.

“The judges sentence them, I don’t,” he said. “Often, we are arguing for higher bonds than are being approved.”  Also, the Colorado legislature has been moving in the direction of reducing bonds in criminal cases, or not imposing them at all, he said. The toxic combination of lowered or non-existent bonds and the lack of a local pre-trial services program can impact county and local services, Hotsenpiller said. “They end up with additional charges while they are out, they go back to jail, and we are not even addressing the offender’s conduct.”

“Maybe if we had pre-trial services here, we wouldn’t need a new jail.”

Even keeping the D.A.’s office staffed can pose challenges, and requires finding professionals who really want to live here, he added. And often, talented individuals move on to positions of greater responsibility.

“Keri Yoder was my assistant district attorney until 2016; now she is a district judge.”

When it comes to criminal cases, the Seventh Judicial District D.A.’s Office is not isolated by its rural location, but deals with broad, societal issues such as drug use and domestic violence. Attorneys make a point to consider aggravating circumstances and mitigating factors, and work hard to be fair to all parties, Hotsenpiller said.

“We try to identify both aggravators (for example, a sexual assault inflicted on a victim by someone in a position of trust) or mitigating factors,” Hotsenpiller said. “Any time a victim is in a situation where there is a power imbalance, we believe that is an aggravator, and we bring it up.”

“Our job is to follow the evidence, and the law,” he said. “That is truly what we do; there is no discussion of gender or ethnicity at all.”

One group of people does receive some special consideration, however. “We believe in the importance of looking at kids, and being aware of how they are affected,” Hotsenpiller said. “So many people are in the adult system, children can suffer collateral exposure to trauma.”

Nationwide, domestic violence is the third leading cause of homelessness, according to the non-profit Safe Horizons. Every year, 3.3 million children witness violence directed toward their mother or female caretaker by a family member, and 40 to 60 percent of men who abuse women also abuse children. 90 to 95 percent of all victims of domestic violence are female.

“Being in homes where you are exposed to arguments and violence, where you are seeing trauma directed to and around you, really does damage to folks.”

The D.A.s office is now updating its website to be more responsive, and community feedback is welcome, he said.