Ashford Nathaniel Archer argued to the state’s second-highest court that there was insufficient evidence he committed child abuse resulting in death, stemming from his religious group’s 2017 killing of two girls in San Miguel County.

The Court of Appeals disagreed last week, finding Archer was aware of the group’s overall decisions that led up to abandoning the victims in a car without food or water, where they likely died of starvation and dehydration in what prosecutors labeled as torture.

“Archer did not simply fail to intervene; to the contrary, he engaged in affirmative acts of mistreatment,” wrote Judge Matthew D. Grove in the July 7 opinion. 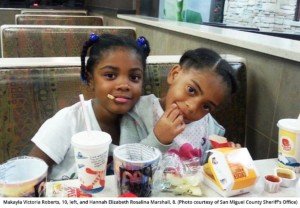 Hannah Marshall, 8, and Makayla Roberts, 10, were discovered dead and decomposing in a vehicle located on Frederick “Alec” Blair’s Norwood farm. A forensic examiner was unable to conclusively state the cause of death because of the condition of the girls’ bodies, but evidence suggested long-term malnourishment near the end of their lives.

Archer was part of a traveling group of five adults and four children. Archer and his wife, Madani Ceus, were the biological parents of two of the children, while group member Nashika Bramble was the mother of the victims.

Ceus was the spiritual leader of the group. At Ceus’ trial, prosecutors said Ceus “made herself to be God.”

As The Montrose Daily Press reported, the victims had a “last supper” on July 20, 2017. Ceus believed Makayla had not worked hard enough on her “past life” and was impure. The consequence was to banish the girls to a vehicle on an isolated section of the farm with no food or water.

After friends and family of Blair grew troubled over his behavior as a result of his involvement with the religious group, Blair’s father visited the farm on Sept. 8. Blair told his father about the dead children, prompting a call to police.

Prosecutors charged all adults who participated in the group.

“Makayla and Hannah were tortured as they died of thirst,” Chief Deputy District Attorney Seth Ryan told jurors. “That’s what Ms. Ceus did, along with the rest of the group on this property. They tortured them.”

A jury convicted Archer on two counts of child abuse resulting in death and one count of being an accessory to a crime. Archer appealed his convictions, arguing the prosecution had presented insufficient evidence of child abuse. Colorado law defines the offense as causing an injury or permitting a child to be placed in a life-threatening situation, as well as engaging in a pattern of conduct resulting in malnourishment or mistreatment.

A three-judge panel for the Court of Appeals was unconvinced, noting evidence that Archer was part of the collective decision-making about the girls. Archer’s actions led to the “physical perimeter” around the vehicle preventing anyone from helping the victims, and Archer helped Blair conceal the bodies once they learned the girls were dead, Grove elaborated in the opinion.

“There was sufficient evidence that Archer acted knowingly or recklessly because, even though he was aware that the victims were confined to a car during the summer and then abandoned there without food or water, he did nothing to help them, and in fact he consciously disregarded the substantial risk that they would die as a result of being abandoned,” Grove wrote. “Accordingly, the evidence presented at trial was sufficient to support Archer’s convictions for child abuse resulting in death.”

In reaching its decision, the panel concluded Archer’s “active participation in the decision- making process” was reason enough to sustain his conviction, even if he did not physically mistreat the victims.

The case is People v. Archer.